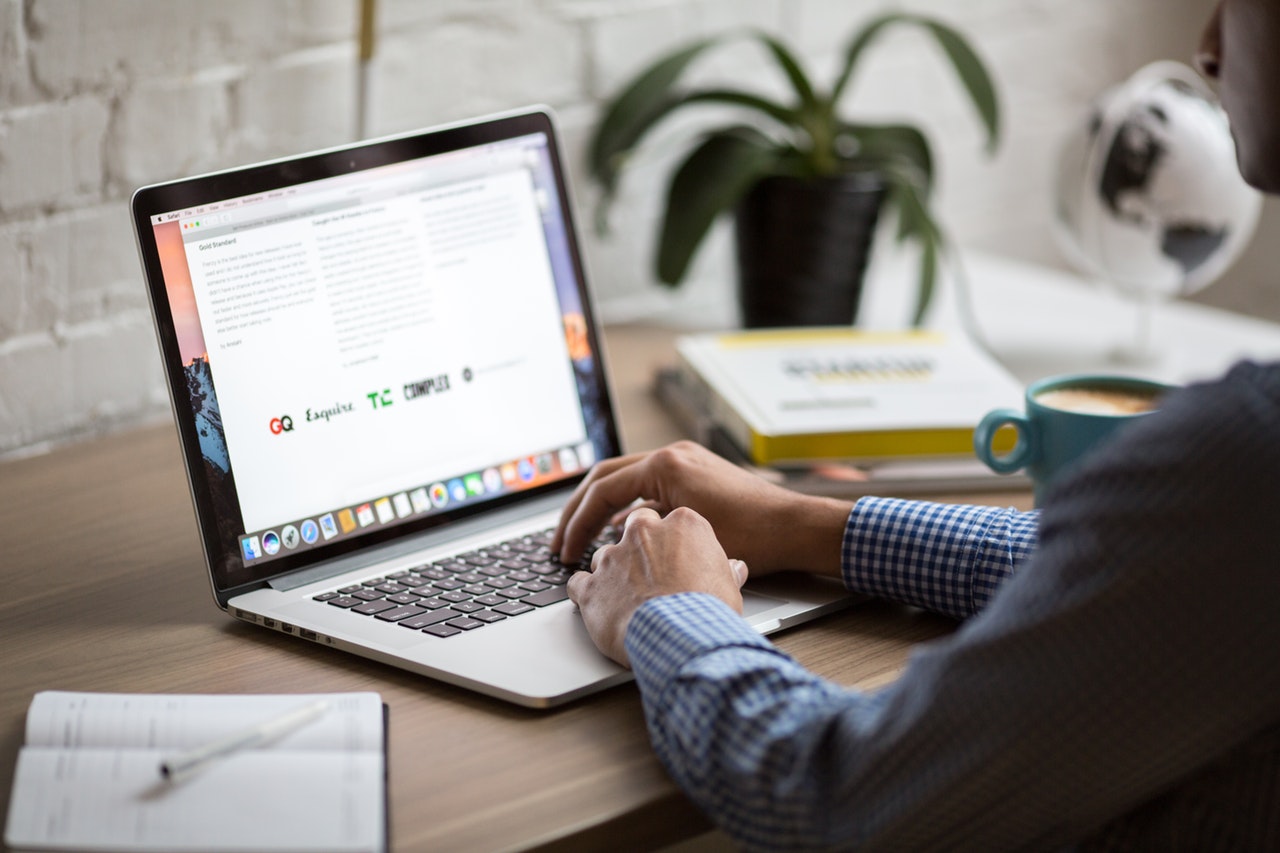 It might not be as “sexy” as social media or have the granular targeting capabilities of PPC advertising, but direct marketing can be among the most powerfully effective marketing channels at your disposal. Despite the significant impact that direct marketing can have, it sometimes gets a bad rap for being, well, a little too direct.

From billboard advertisements on the side of the highway to televised, multimillion-dollar TV spots during the World Series, direct marketing has developed something of a trust problem in recent years. Marketing budgets have never been bigger, but no amount of money can buy trust, which is why referral programs have become so important to many marketers chasing virality.

As desirable as viral growth is to today’s marketers, truly sustainable viral growth is exquisitely rare. However, while it might be difficult to achieve — and sustain — a viral referral program, it’s far from impossible. Several companies, including Airbnb, Dropbox, and PayPal have all achieved incredibly successful viral referral programs that drove enormous growth in the early days of those companies. The key to this kind of growth? Perfecting the “viral loop,” the steps customers have to take to refer a product to new users.

Let’s take a look at how six companies approached viral growth and what they did to master it.

Even in Silicon Valley’s innovation culture of solving difficult problems, Airbnb is an outlier. Not only did the company revolutionize how we think of the hospitality industry, it also managed to create and cultivate a strong sense of community that it successfully leveraged into a truly viral referral program to attract new hosts and guests to the service.

What made Airbnb’s referral program so effective was the company’s approach to user data. 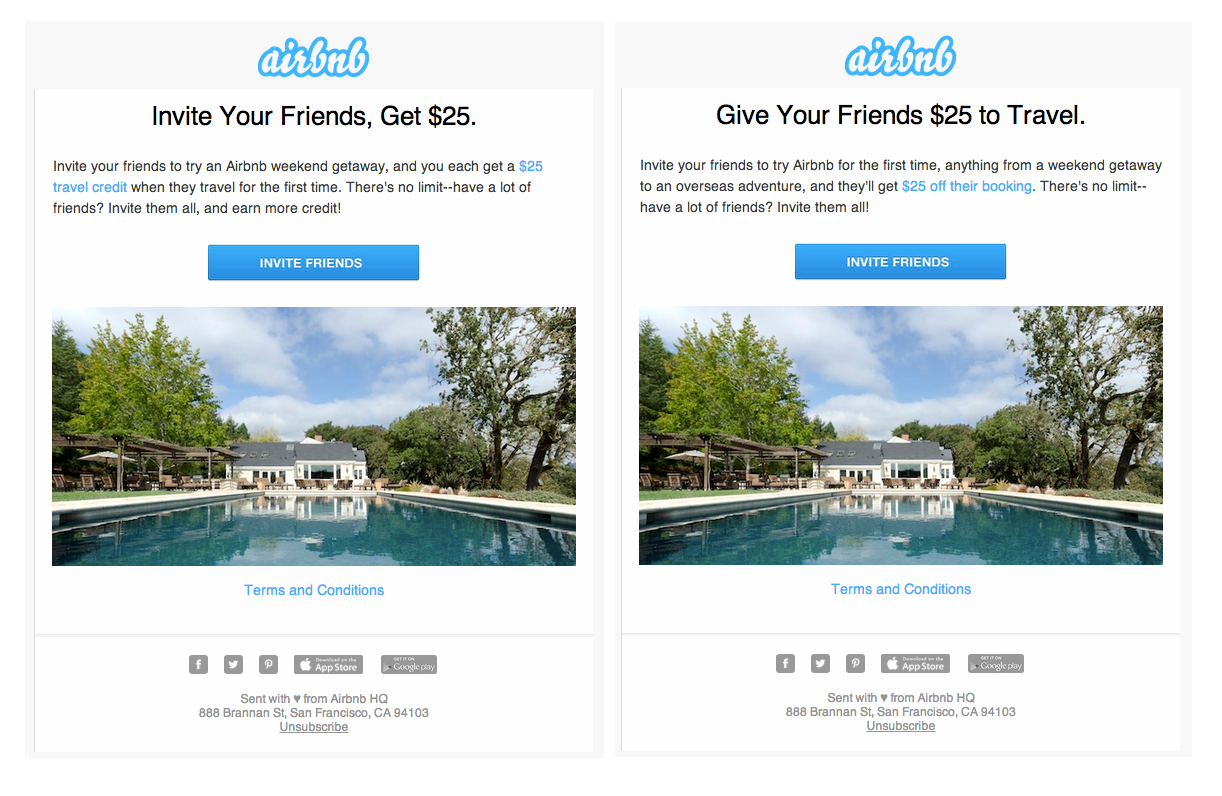 To craft its referral program, Airbnb left nothing to chance. It carefully A/B tested the messaging of its referral campaign and optimized it to deliver maximum impact and increase the likelihood that guests would refer their friends to the service. Airbnb dove deep into its user data to create new referral features, tracked user events to determine the best times to send referral emails, and ultimately achieved an incredible rate of 900% year-over-year growth.

If you want to replicate Airbnb’s success, you’ll need to:

Not only did Airbnb’s investment in developing the skill sets of its engineering team have a remarkable impact on the success of its referral program, it also strengthened the company’s internal community and helped ambitious team members identify opportunities for personal growth. A win-win for everybody.

Altruism can certainly be a motivating factor in referral campaigns, but sometimes, appealing to people’s selfishness can be just as effective. Case in point, online storage provider Dropbox. 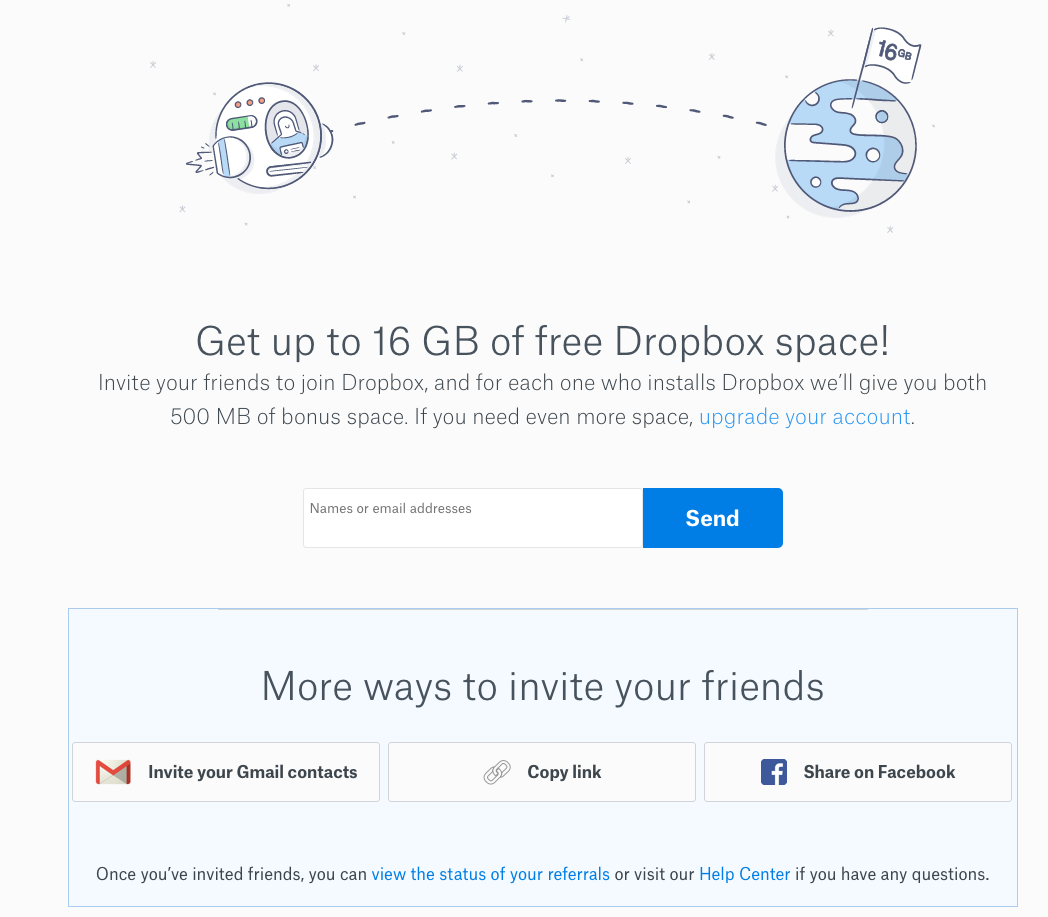 To appeal to existing users and tempt them into recommending the service to their friends, Dropbox offered users up to 16GB of additional cloud-based storage if they referred new users to Dropbox. Every successful referral gave both parties an additional 500MB of storage, up to a potential total of 16GB.

Not only did Dropbox give referrers plenty of ways to spread the word about the service — including direct links, social integrations, and a Gmail contacts import function, it also gave users a handy checklist they could complete to track how much additional space they had earned. This might not seem like a big deal, but the inclusion of a checklist can be surprisingly persuasive, especially given the fact that Dropbox cleverly introduced reciprocal benefits and made completing each referral step a goal in and of itself. 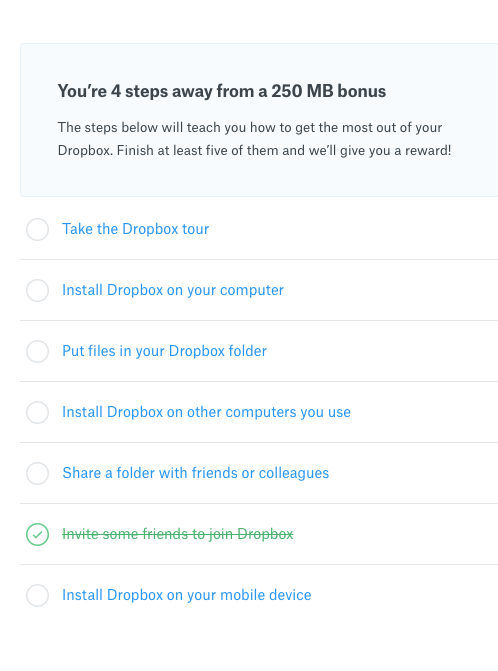 The campaign was so successful, Dropbox attracted more than 2.8M new users in just 30 days. To put yourself on track to achieve this kind of growth, you should:

The landscape of the web—particularly the now-savagely competitive online payments space—was very different at the turn of the millennium in 2000. Back then, referral programs were in their infancy compared to the sophisticated cross-platform campaigns of today, but PayPal’s early forays into the world of referral programs were pretty radical, even by today’s standards. 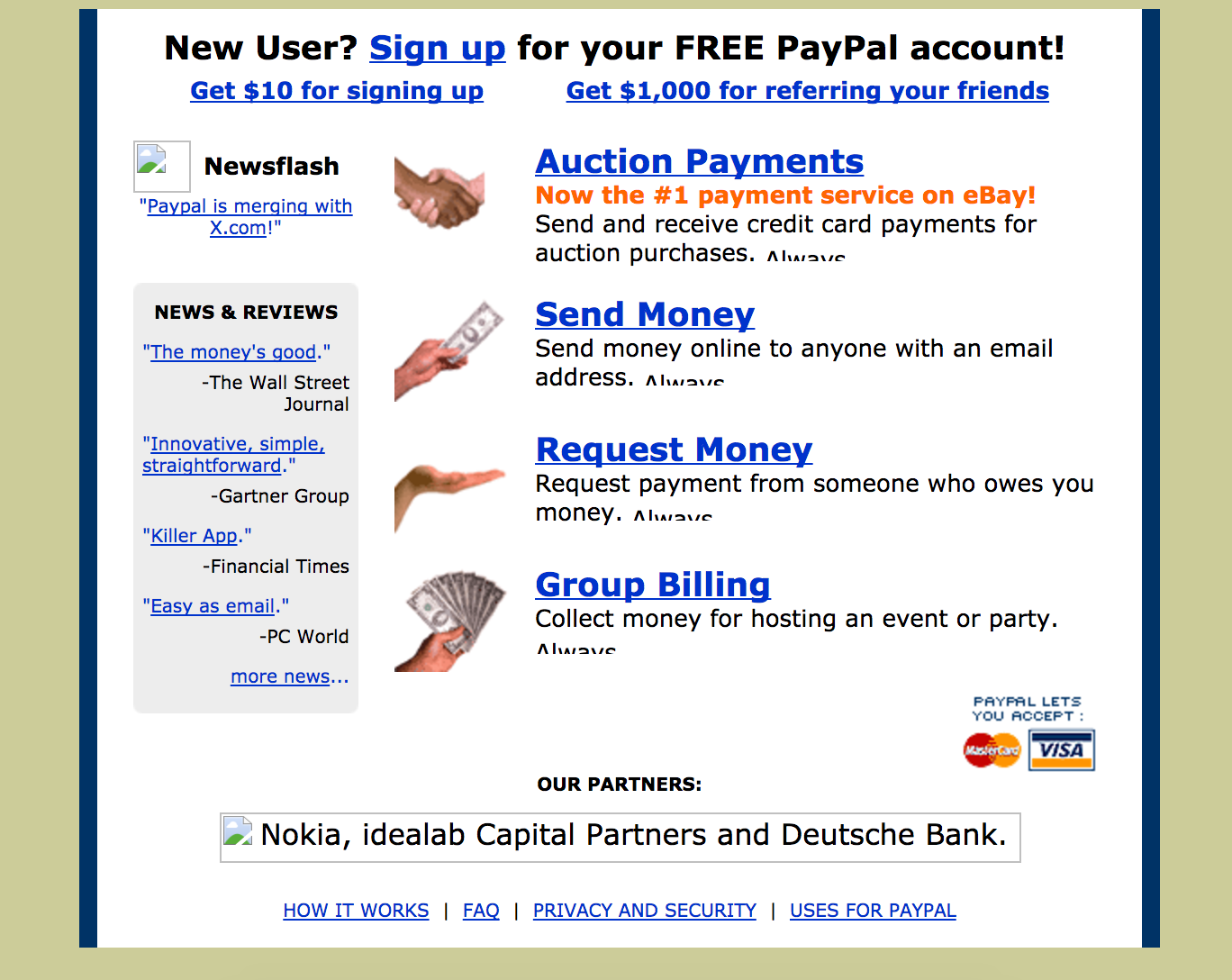 To achieve rapid early growth, PayPal opted for one of the most effective and time-honored motivations to get new users to spread the word—cold, hard cash. Users were offered a cash reward of $20 if they referred a friend to PayPal. This might have been a very risky proposition for smaller companies, but it paid off big for PayPal; within just one month, more than 100,000 new users had signed up for PayPal accounts. This, in turn, broadened the reach of the emerging payment network considerably, which became a flywheel for continued growth.

If you’re thinking of offering similar incentives for your next referral campaign, try the following:

So far, we’ve looked at referral programs for products that had already launched to varying degrees of adoption. But what about creating excitement and growing an audience for a product that doesn’t yet exist? This was the dilemma facing mobile stock-trading app Robinhood. 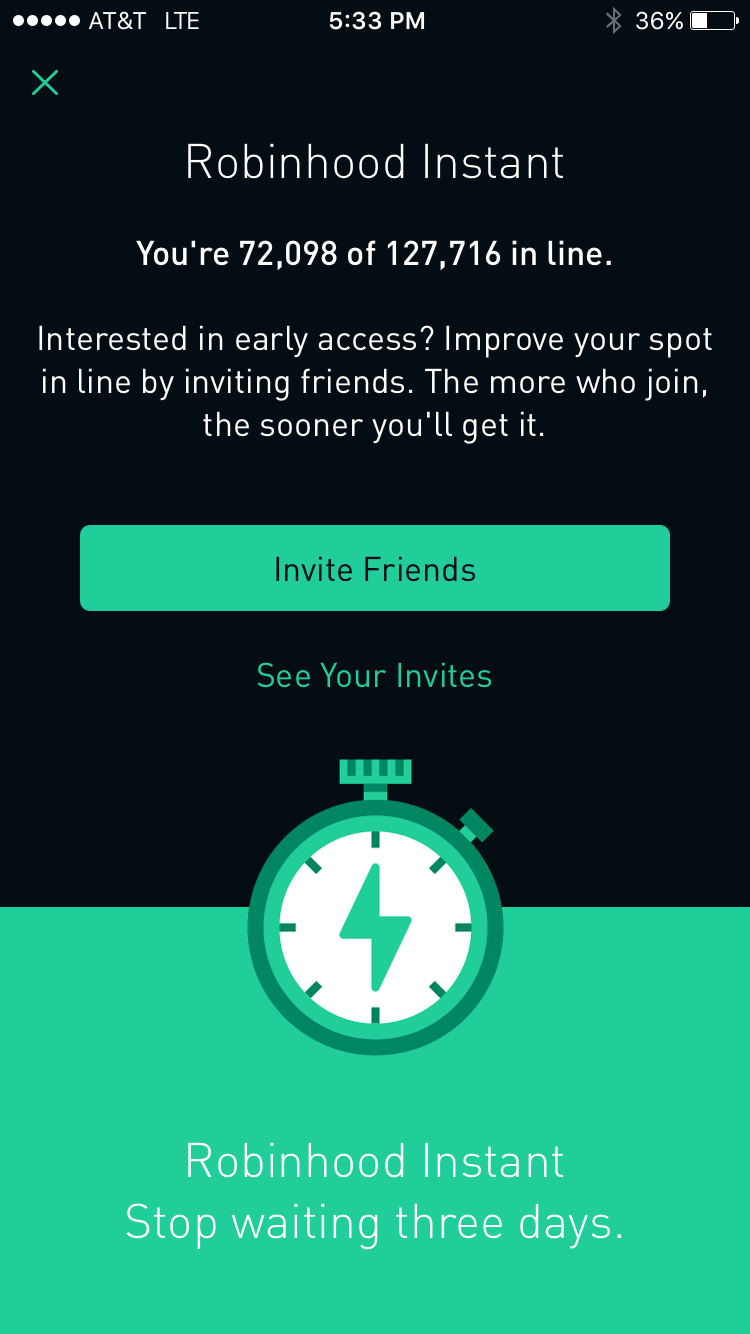 The idea behind Robinhood was simple. It offered stock trading functionality with zero commission fees—an attractive proposition in and of itself—right on users’ phones. Today, there are dozens (if not hundreds) of similar apps, but in 2013, the market for mobile day-trading apps was a lot less crowded. So much so, that Robinhood was able to manufacture virality by creating hype about the soon-to-be-launched service through a waitlist for new users.

However, unlike similar initiatives that have launched over the years, Robinhood took the idea of exclusivity and its waitlist one step further by allowing users to jump the queue by referring friends to the app. The more people that waitlisted users referred, the more places in line they’d be able to jump.

To further entice users to refer friends to the app, Robinhood included tantalizing ticker data on the hottest stocks of the day directly beneath the call-to-action, prompting them to refer their friends, hinting at the potentially lucrative investment opportunities they could seize upon once they’d been granted full access to Robinhood. This helped waiting users visualize using the app long before they were allowed to start trading, which made the service even more tempting for would-be day traders. 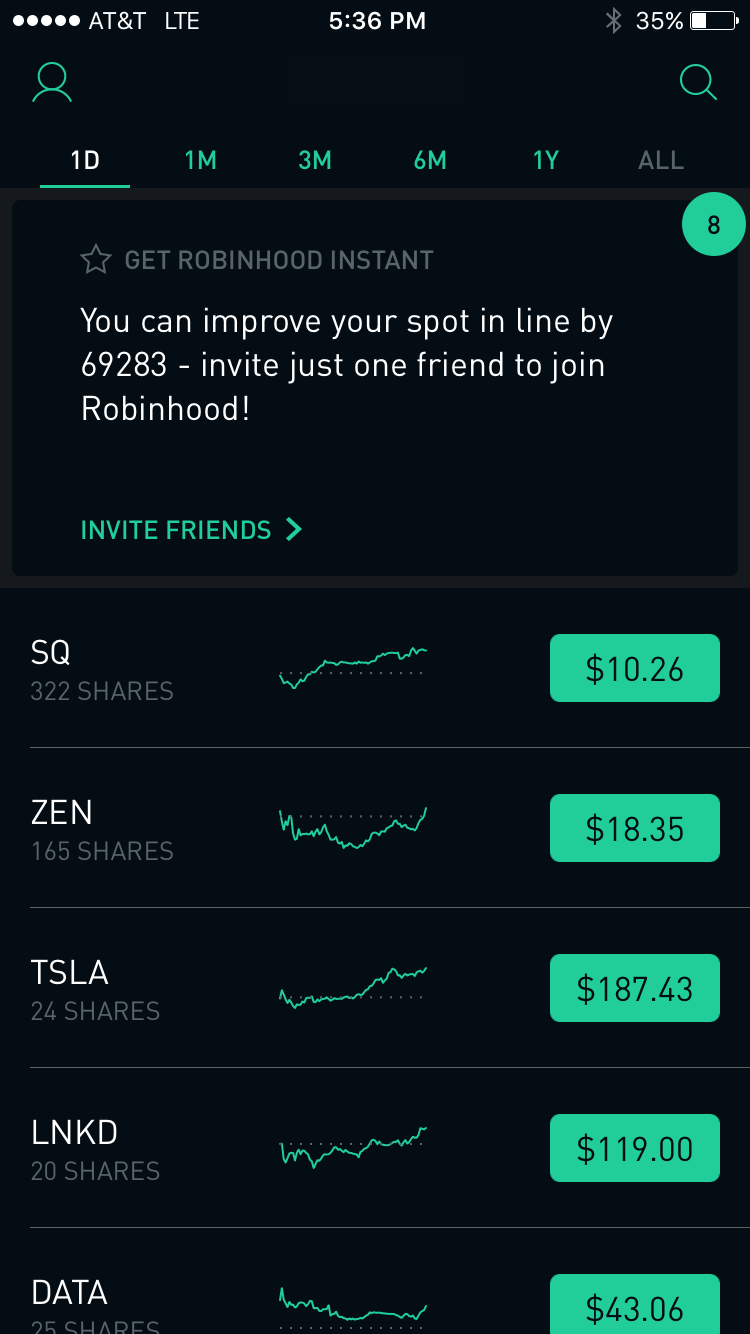 Robinhood’s referral campaign was incredibly effective. Shortly after launching, the app’s waitlist ballooned to more than a million people, two-thirds of whom were referrals — an excellent example of how referral campaigns don’t have to be complex to be incredibly successful.

To leverage this kind of excitement in your own campaigns, you should:

Despite their ubiquity, selling cars is a tough gig. It’s even tougher when you’re trying to position a new car company as the epitome of automotive luxury in a stagnating economy, but that’s exactly what Elon Musk’s Tesla did with this referral campaign. 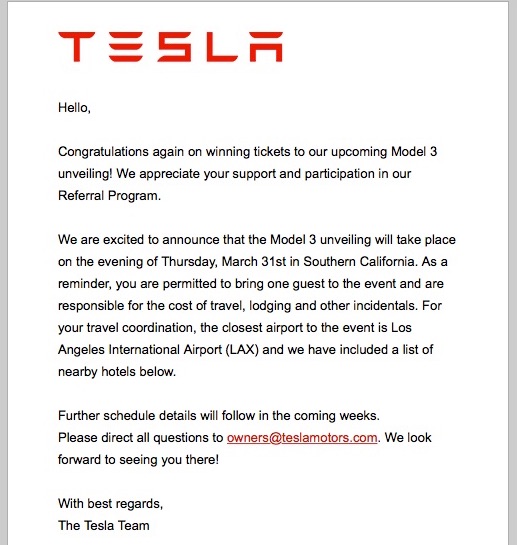 Amazingly, Tesla spends virtually nothing on marketing. Even more remarkable is that Tesla’s referral campaign asked fans to put money down on a vehicle that had not even been publicized at the time. To achieve this seemingly impossible feat, Tesla took the opposite approach to Airbnb’s campaign of inclusivity by creating hype around the idea of Tesla’s exclusivity.

The core idea behind the campaign was the limited number of tickets made available to a prestigious launch event for Tesla’s then-upcoming Model 3 series of luxury electric vehicles. Per the email shown above, Tesla’s most loyal brand advocates were permitted to invite just one guest to the launch event in southern California. This not only kept forecasted attendance at manageable levels for the venue—a Tesla dealership—but also created an air of exclusivity ordinarily reserved for Hollywood premieres. For a luxury automotive brand, this kind of intimacy was both unusual and highly effective. 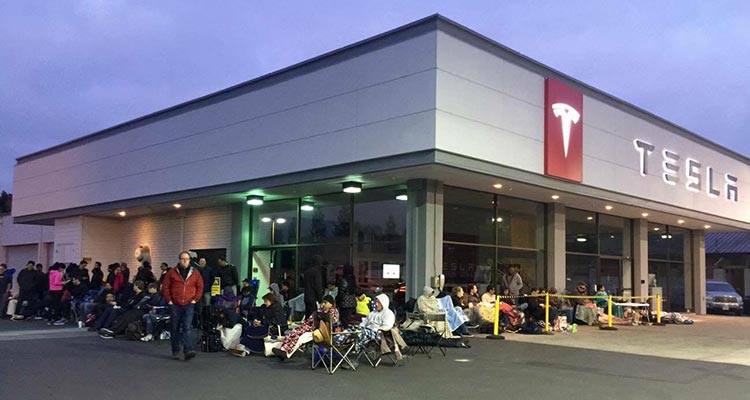 Tesla understood that this type of referral campaign wouldn’t result in a massive overnight increase in preorders or revenue, but it did extend the prestige and exclusivity of Tesla’s brand to a real-world event. It also reinforced the “insider” status of attendees and their guests, which was a smart play by a brand hoping to make headway in a crowded but incredibly lucrative market.

To replicate Tesla’s success in your next referral campaign, you should:

Uber has made several missteps that would have doomed other companies, but one thing that Uber has done better than most other brands is leverage the ease and simplicity of using its app to drive referrals to the ride-share service. 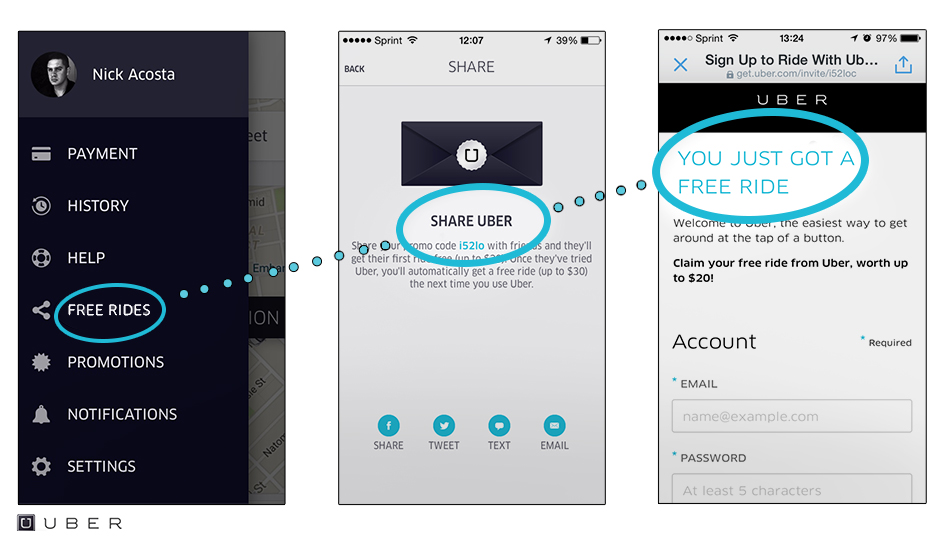 Uber’s referral program was remarkably successful for two main reasons. One, it made referrals a core part of the app’s functionality, going as far as giving its Free Rides program space on the app’s primary navigational menu. Two, it prompted users to recommend Uber to friends and family at multiple touchpoints throughout the app, reinforcing the ease with which riders could score free trips and highlighting how easy it is for users to refer friends directly within the app itself.

It might lack the prestige of Tesla’s approach or the hype of Robinhood’s time-sensitive incentives, but Uber’s referral program has driven incredible growth at the ride-share company. To drive similar growth for your next campaign, you should:

A strong referral campaign can help your business achieve new heights of growth. The key is understanding how to leverage the right incentives to appeal to the right prospects.

Think about your next referral campaign and how the companies above relied on the advocacy of loyal brand ambassadors to drive growth. You might not be able to offer the financial incentives of PayPal or create the hype of a Tesla Model 3 launch event, but you can think creatively about how to get your most loyal fans to help build your company with you.

Latest posts by Walter (see all) 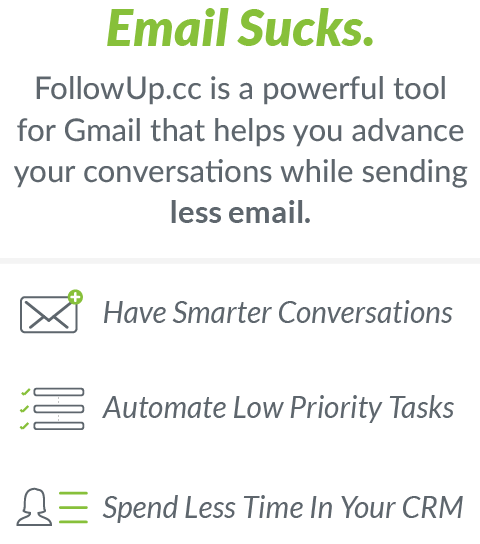